The Act of Devotion 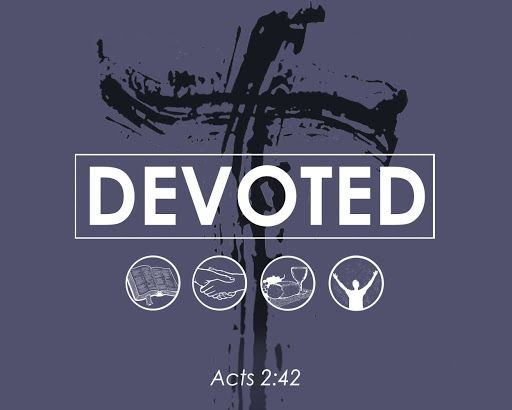 In the 1980s, a movie was released called Grease.  In that movie, there was a song that was sung by the two leading characters and a phase in that song had these words, I'm hopelessly devoted to you.

The act of devotion should be a thoughtful act but the word devotion can also be carelessly tossed around.

True devotion is a powerful thing when it comes to our relationship with the Lord, acts of service to our church, and in relation to our spouse and family.

The word devotion can also be used in less passionate ways like I'm devoted to a certain television show and would never, ever miss it.  I’m devoted to eating ice cream every day.  I’m devoted to going to Disneyworld at least once a year.

In my life, I have had seasons of devotion for some of the things listed above, but I did not remain truly devoted to them. There are only a few things in my life that I am absolutely devoted to. They are constant and unwavering.

In the book of Acts 2:42 (NET) it says, They were devoting themselves to the apostles’ teaching and to fellowship, to the breaking of bread and to prayer.

I wonder why the writer of the book of Acts chose these four things for the early church to focus their devotion on.

Acts 2:42 says, they devoted themselves to the apostles' teaching.  The only way this small group of believers was going to fulfill the words of Acts 1:8 to go into all the world and preach the gospel was to devote themselves to the teaching of those who had been with Christ.

The early church was also devoted to fellowship.  This word had a slightly different meaning in the book of Acts then we may interpret fellowship today.   The meaning in the New Testament was 'sharing something in common' which could include spiritual conversations, personal needs, and hope for the future.

The third thing on the list of devotion was Breaking of Bread.  This term was also used in reference to the Lord’s Supper (communion).  Luke, the author of Acts, also used this term to describe the sharing of meals together which was also part of the communion experience in the early church.

Luke closed out the list of things one should devote themselves to with Prayer.  At the time of the writing of Acts, prayers were offered three times a day. (morning, afternoon, evening).

These four things certainly give us something to consider when looking at our own lives today.  (The Apostles' Teaching, Fellowship, Breaking of Bread, and Prayer)

When you take a close look at your life, what would you say you are truly devoted to?

Everyone is devoted to something and that devotion is forming you.