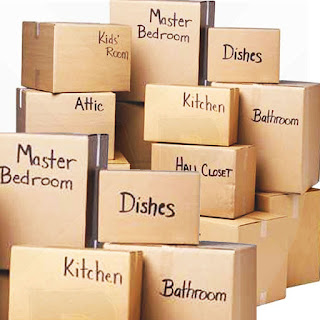 In June of 2000, we bought the house that we live in now.  Once the ink was dry on the dotted line, we took possession of our property.  It felt good to walk into our home all those years ago, knowing it was ours.

I can still remember unpacking dishes, putting them away and saying, "I don't ever want to do this again."

At that time, we had moved, I'm estimating, over 20 times.  These moves took us places like Florida, Boston, North Dakota, Missouri, and different locations in Michigan on the westside, eastside, south, and north.

That number doesn't even count the moves we made during our seven years in the Philippines.

Now, the very thought of packing up a house and moving actually sends a lightning bolt of fear coursing through my veins.  Over the past 20-years, we have discussed downsizing, but nothing ever materialized from the many discussions except the inner panic I felt at the very thought of it.

"Go through the camp and tell the people,
'Get your provisions ready.
Three days from now you will cross the Jordan here to go in
and take possession of the land
the LORD your God is giving you for your own.'"
Joshua 1:11

Joshua had previously seen the promised land.  He was one of the twelve spies that originally went in to scout things out.  He was not unaware of what lied ahead.
After all,

Whatever you are facing today, determine in your heart that you will possess the land that the Lord has given to us.

He has promised us...

Victory is yours!   Time to possess the Land—Home Sweet Home.