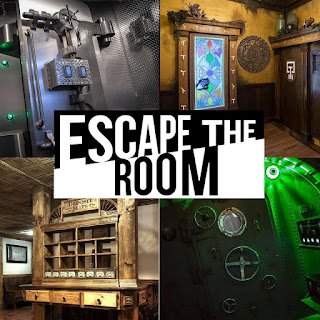 Escape Rooms have been a popular group activity for the past few years.  These rooms are where people work together to try and escape a room in less than an hour with minimal clues.

The activity seems to hold potential for fun, but I'm still a bit skeptical about the whole process.  I believe for success in an event like this, all the player needs to be team players and allow each member to play to their strengths.

But, even if you are the best team player in the room, as the clock begins to tick down, at some point, the alfa male (or female) in the room will manifest to take on the responsibility of giving directions.  This isn't such a bad thing because having a leader is a necessary part of finding a way out.

The alfa male in the "Exodus-escape room" was a reluctant Moses.  It was DL Moody who said this about him.  "Moses spent forty years thinking he was somebody, forty years learning he was nobody and forty years discovering what God can do with a nobody!”

In the Greek, Exodus actually means a way out, and just like the popular Escape Rooms of today, someone behind the scenes is holding the information that will help you escape.  There is a way out of these escape rooms--the players just need to figure it out or ask for help.

In Exodus 14:21 (ESV) it says, Then Moses stretched out his hand over the sea, and the Lord drove the sea back by a strong east wind all night and made the sea dry land, and the waters were divided.

Are you facing an impossible situation?  Do you feel like there is no escape for you?

No temptation has overtaken you that is not common to man. God is faithful, and he will not let you be tempted beyond your ability, but with the temptation, he will also provide the way of escape, that you may be able to endure it.

Spritually speaking, no one wants to find themselves in an Escape Room situation, but if I find myself in such a place, I want to be on God's Team!  He will always provide a way out--a way of escape!