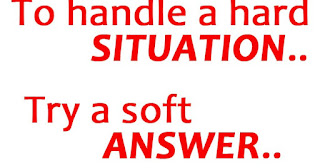 I try not to be a yeller.

...and there are a few situations that warrant yelling; like when a child is heading into a dangerous situation or the dog is running towards the road or somebody scares me.

I've yelled like a crazy person in all these situations.

But when one adult, yells at another adult that is over-the-top uncomfortable.

I've been in a situation like this a few times throughout my life.  Usually, when the yelling starts, I turn tail and get out of there.

Don't want to see it or hear it.

Recently, I was an innocent bystander when this happened.  There was one adult who yelled at another.

I was trapped--no way out.  I sat in shock as one of the adults yelled angrily at the other.  It was venomous.  I was frozen to my seat contemplating if I should attempt to defend the one being yelled at or remain a silent observer.

I watched the face of the person being yelled at and wondered, what would she do next?  Would she yell back?  Would she become defensive and get emotional against the verbal attack?  Would she stand and point her finger in his face and shake it with equal dramatics?

My inner self was taking offense, as I silently watched the scene unfold.

Right before my eyes and ears, she spoke.  Her voice was in control without the slightest hint of fear or indignation.  Her tone was clear, and her thoughts were in order.

Then the yeller interrupted her and verbally attacked again.  Yikes.  This was really getting ugly.

She responded again with confidence and in a non-combative way and...he finally heard her.

Proverbs 15:1 in the NET Bible says, "A gentle response turns away anger, but a harsh word stirs up wrath."

I wish in every situation that my 'go to' place was "A Gentle Response."