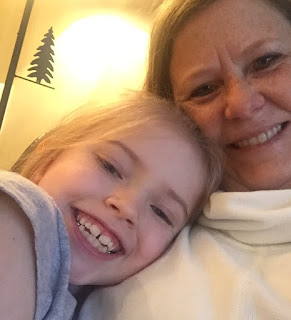 A few weeks ago, my granddaughter who is 7 yrs old was trying her best to communicate with me but we had come to an impasse.

What I saw and heard was disrespectful behavior.  So, I did what any good grandma would do...I tattled on her.  I felt the behavior needed to be dealt with by a parent.  That's the beauty of being the grandma--we don't have to do the disciplining anymore!

The mom stepped in and punishment was doled out for the offense.

A bit later, her father sat down with her to follow up on what had happened.  Enough time had passed to give my granddaughter the ability to tell the whole story and that's when her mom and I got the missing pieces in the story.

My granddaughter had been warned by her mother that there was an area in her brother's bedroom that was dangerous.  (a fireplace from 1883) When her younger brother was getting too close to the area of concern, my granddaughter attempted to protect him by repeatedly hitting him.  (It seemed logical to her.  After all, she was saving his life.)

And that's when grandma stepped into the situation.  I saw only one part of the picture, and when I asked her to stop hitting her brother, she yelled at me, "NO!" multiple times.  When I asked her to leave the room, she again responded, "NO!" more than once.

That's when the tattling took place and the punishment was given.

When her father spoke with her a bit later, he helped my granddaughter understand how she could have handled the situation without being disrespectful to her grandma or hurtful to her brother.

The punishment was adjusted once all the pieces were in place.

This experience with my granddaughter caused me to think how easily a person can react wrongly...when they don't have all the information.  (Oh, how I've...been there and done that!)


The one who gives an answer before he listens--that is his folly and his shame.

Okay,  I'm not the only guilty party in this story.  Let's just say, we were all a bit at fault...well...except the father.

That's so like our Heavenly Father.  He is quick to listen, and with Him there are no Missing Pieces.