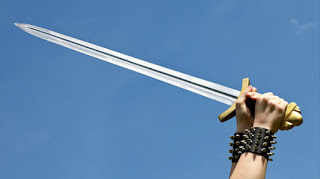 Not too long ago, I took two of my grand-kids to the store.  It was four stores to be exact, and they were troopers.  It only cost me two bags of sour gummy worms.

When I shop alone I only have one thing in mind--getting the items I need and getting out of the store as quickly as possible.  However, when I take any of my grandchildren--anywhere, my mind is always occupied with protecting those babies from harm.  I am on guard at all times with that one purpose in mind.  Nothing is gonna happen to them on my watch.  NOTHING!

Moving from the car to the parking area to the store, I'm constantly taking mental note where they are at all times.  I have been given a job to keep them safe, and there is no way I'm going to leave my post or shirk my duty.

There is a story in the Old Testament that my husband has preached on many times.  It's about a little known Bible character who understood protecting what was entrusted to you.  This Bible character made a stand and defended a bean field against the Philistines.  This little know person from the Bible is Shammah.

In 2 Samuel 23:11-12 (NET) the story goes like this...Next in command was Shammah son of Agee the Hararite. When the Philistines assembled at Lehi, where there happened to be an area of a field that was full of lentils, the army retreated before the Philistines. But he made a stand in the middle of that area.  He defended it and defeated the Philistines; the Lord gave them a great victory.

So your mind may be racing right now trying to see how this might apply to your life today…maybe this verse will help you bring it into perspective.

In John 10:10 in the (NLT) version of the Bible it says, "The thief’s purpose is to steal and kill and destroy.  My purpose is to give them a rich and satisfying life."

Our enemy, Satan, is actually unable to steal what we give to the Lord to protect.  He is not able to kill what we partner with God to defend.  He is powerless to destroy that ‘bean field’ if we are on guard.

The only power Satan has is what we give him.  He will only take what we no longer protect.

Could you imagine releasing someone you love to harm's way?

If you are anything like me, your response would be… "Nope.  That's not gonna happen on my watch.  Not while I'm on guard."

Now think about the things in your life that the enemy is trying to steal, kill or destroy and place your feet firmly in the 'bean field,' take your stand and watch God bring the victory.