Directions Are Not Suggestions 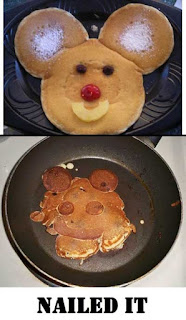 I am notorious for not following the directions.  I often look at a recipe more like a list of suggestions for my consideration.  I am always looking for short cuts and substitutions in all my cooking recipes.  And yes, there have been some disastrous cooking fails in my lifetime that have come from cutting the corners.  The one pictured is not one of mine, but it could have been.

In the past, I’ve said the following:

"I'm not stirring this pudding continually for twenty minutes.  Who does that?"

"I don't think the butter needs to be cold.  Who wants to work with cold butter?"

Usually, as I'm scrapping my epic fails into the garbage disposal, I wonder what might have happened if I'd just followed the directions step by step.

Directions are meant to be followed, after all, someone who came before me perfected the recipe through trial and error.

In Roman 5:2-5 in the NET Bible there is a sorta recipe that if we follow it step by step will produce something beautiful.  If we chose to take a short cut, it may not turn out as planned.

"...we rejoice in the hope of God’s glory.
Not only this, but we also rejoice in sufferings,
knowing that suffering produces endurance,
and endurance, character, and character, hope.
And hope does not disappoint,
because the love of God has been poured out in our hearts
through the Holy Spirit who was given to us."

On occasion, God’s recipe for our lives may require a pinch of suffering but keep following the steps all the way to the end because I’m thinking this Bible verse isn’t just giving us suggestions, but rather it’s a recipe meant to be followed as written.  God doesn't do shortcuts!

Directions Are Not Suggestions