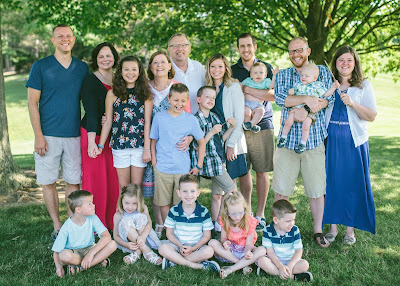 Our youngest grandchild recently turned one.  For being a little guy, he has the grip of a grown man.  Once he gets hold of something, and he doesn't want to let go, there is only one way to break his grip.  If you guessed pry back his fingers, you'd be correct.

The boy knows what he wants and he will hold fast to whatever that may be.  You probably wouldn't notice this in the family photo I posted, but #10 is holding a stick much to his mama's dismay and his daddy's giggles.  He wouldn't let go and as you can see...it's in the family picture as a forever memory.

Speaking of holding on and not letting go, today is our 42nd wedding anniversary.  We married young, but we knew what we wanted.  We wouldn’t be dissuaded.  On September 6, 1975 we took hold of each other and have held on tightly.  Forty-two years ago, we made this forever promise one to another.

To have and to hold from this day forward,
for better for worse, for richer for poorer,
in sickness and in health, to love, and to cherish
till death us do part.

Over the past four decades, plus two years, we have known blissful bounty and traumatic hardships. We have been blessed with three healthy children, and I had a miscarriage  37 years ago.  We've lived in 16 houses.  Traveled thousands of miles to serve as missionaries in the Philippines.   We've had highs, and we've had lows.  We've had laughing, and we've had tears.  We've known sickness and we've known health.  We've added to our family and we've lost some to death.  In all these years, we've Held Fast to each other and the commitment we made 42 years ago.

Today, I recall another vow, promise, commitment I made.  I was a mere child, but once I make up my mind (just ask my husband about this) for me there was no turning back.  Just as my grandson held tightly to his stick in the family photo, and my husband and I took hold of each other for life, I also made my decision for Christ and when I took hold of Him, there was no way I was letting go.

Verse 23 of Hebrews 10 says it way better than I ever could.  "Let us hold fast the confession of our hope without wavering, for He who promised is faithful."

Today is my wedding anniversary, and it's a special reminder to continue to Hold Fast.  I'd also like to use this day to challenge you to hold fast to the ones you love and equally stay true to the commitment you made to the Lord.

Grandkid #10 may have dropped from another apple tree, but I think this little guy rolled under mine. You gotta love those strong willed kids because when they take hold of Jesus...they Hold Fast.