The Perks of Partnership 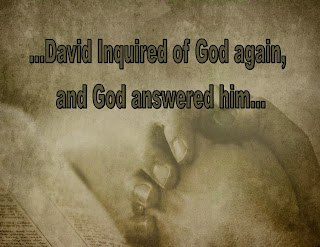 He tells me I'm too close to the curb or turning to fast.  My all time personal favorite is when his arms start waving around in the air and he's gasping for breath like his life is about to end.  Yes, when I'm driving he does stuff like that.  And everyone knows how much the driver loves that kind of stuff...said no one ever.

Now I will admit, there has been the rare, and I do mean rare, occasion when he truly has warned me, for real, and I have avoided an accident.  When this happened, I didn't have the same perspective that he did.  The car in question was in my blind spot...but not his.   Even then, it was my choice to follow or not follow his direction.

A while ago, I made some notes in my journal from I Chronicles 14.  In my notes, I titled this chapter The Perks of Partnership.  David inquired of the Lord whether he should go to battle or not with his enemy.  God answered, “Attack; I’ll give you the victory.”  The part of this chapter that I love the best is that David partnered with the Lord by asking and then followed the instructions.   How silly it would be to ask for advice from a knowledgeable person and then do the opposite of what that person said.

For example, when we call on the Lord to help us through a trail or even to remove it from our lives then we choose not to do what we know is right.   Instead, we think we have perfect sight in the matter.  We pull out into traffic, foot on the gas not seeing that car in our blind spot.  Then we wonder why we're not victorious.

Twice in I Chronicles 14 David inquired of the Lord, and in both cases he was victorious because he understood The Perks of Partnership.  The actual verse says this... "and David did as the Lord Commanded."

Now it is rare to hear the audible voice of the Lord giving us direction like he did David, but in place of that audible voice we have the Bible and the leading of the Holy Spirit.

The Word is God-given.  It is a road map for life's journey and our instruction manual.  It can even bring comfort.  It has the ability to discern the thoughts and intents of the heart.  David asked for the Lord's direction, and then he did as God commanded.

There has been many times I've sat in the driver's seat and ignored the concerns of my highly observant husband as he grips tightly to the dashboard and calls out his warnings from the passenger seat.

"You're too close to the shoulder."

"Look out for that car."

And there has been many times I have hit the pothole, ran off the road and had some near misses.

One of The Perks of Partnership with the Lord is listening to your partner because HE has a better perspective than you.