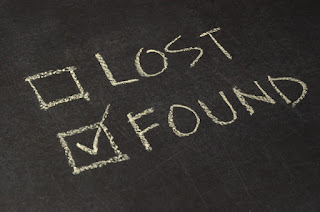 I heard a nasty rumor that as a person ages, it's common to lose things.  I wish I could blame losing things on old age alone, but its been a life-long problem for me.  Daily I play the game of Lost and Found and I often find myself asking this question..what was I looking for?

Many years ago, I lost my cup of freshly brewed coffee and didn't find it for weeks.  That particular cup of coffee was perfect.  It was the right temperature and mix of coffee and cream.  I hate it when I lose a perfectly good cup of coffee.  Later...weeks later...I found it in the guest room closet on a shelf.

I've lost my keys, my coat, my phone, receipts, money, a number of different remote controls and kitchen items that have just disappeared.  And once, a long time ago, I lost my three year old son at the mall.

Each lost item mentioned above caused me to search with a different intensity.  Losing money always hits home and I work hard to find it.  But when I lose my cell phone, stop the presses...heads are gonna roll.  Yet, as wonderful as money and cell phones are I've never seen an Amber Alert called for either one of these objects.

However, when I lost my little boy, the searching was different.  For him my heart ached and I searched with a far different intensity.  Anyone who has lost a child, even for a few minutes, knows that feeling of sheer horror.   You'd give a thousand cell phones and all the money you have to hold that lost child in your arms again.

In Luke 15 Jesus tells three parables about Lost...and Found.  There's a lost coin, a lost sheep and a lost son.  Each one holds value to their owner, but only one of those three lost items is an eternal being...the lost son.

"The Son of Man has come to seek and to save that which was lost.”

I know how relieved I was when I found the money I had carelessly lost and the repeated joy I have when I find my misplaced cell phone, but neither of these found items came close to the overwhelming peace I felt, many years ago, when I held my little boy after being separated from him.

I think that experience might be how the Lord feels about us.  Once...we were all lost, going our own way, making our own choices and then we were found.