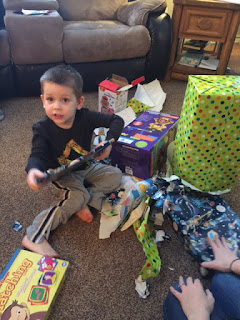 One of our 10 grandkids turned three a few weeks ago.  It was his first birthday to really get it--to understand that he was the man of the hour.

There was no less than four occasions that the Birthday Song was sung to him over the course of his birth week.  Each time his face brightened up with a huge smile.

His father posted a video of one of his birthday celebrations.  Our grandson was instructed to prepare himself to receive his gifts.  He sat down on the floor and folded his hands in his lap anticipating that first gift.  I watched this video over and over...mostly because...he's my grandson, but also because of the expectancy on his sweet face as he reached out to receive that gift.

He had no idea what awaited him inside that wrapping paper--that part of the equation was meaningless to this little guy.  Someone had selected a gift...just for him and wrapped it up...just for him.  He reached out, took the gift and eagerly began to tear it open.

I understand better, as I watch my grandchildren live out their lives in simplicity, why Jesus said, “Let the little children come to me. Don’t stop them, because God’s kingdom belongs to people who are like these children." Matthew 19:14 (ERV)

I wonder what my face and actions look like when I reached out to the Lord in anticipation.  Is it childlike expectancy or adult apathy?

God's gifts are numerous and He gives them freely.  So--get ready--your gifts await you! 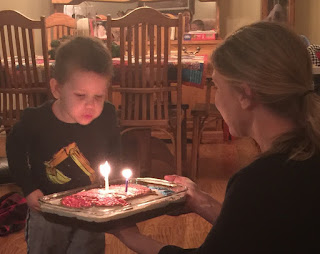